It’s clear to anyone how important doorbells are to their home – how else would they know when someone is calling? They are relatively simple devices, but ones in which there is already a great array of styles and chimes to choose from. And now in recent years, wireless door bell chimes have grown in popularity.

The advantages of wireless door bells are quite clear: they are often more cost effective, they do not require complicated wiring or electrical work in order to install them, they are more portable and flexible, and they often come with a range of additional features that traditional wired door bells can only dream of.

So with this in mind, how do you go about selecting the most suitable one for you? After all, there is already a large range of styles, colors and sounds available, with the selection growing larger all the time. In order to demonstrate just what is out there, this wifi doorbell review guide will compare some of the leading wireless and wifi-enabled door bells that are currently available on the market, to enable you to make a wise and informed decision, and ensure that you purchase the best wireless doorbell for your own needs. 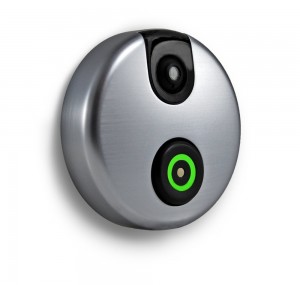 This premium wireless door bell chime is capable of connecting with android and iOS devices worldwide, allowing you to answer your doorbell even when you are on the other side of the world. It comes with a built in motion sensor that will detect anyone in the vicinity of your door and start a call, even if they haven’t pressed the button yet.

Please note that the image above is of the original version. They’ve since improved the product and released Version 2.0 in Bronze and Silver finish.

Furthermore, there is the provision to have extra cameras and sensors working of the same main unit if you wish, affording you unprecedented security and peace of mind even when you’re not at home. The SkyBell is also very easy to install and use. Overall, this device is tremendously impressive, and possibly the best wifi-enabled doorbell available on the market today. 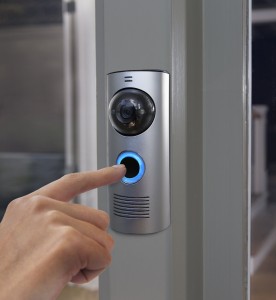 This is a premium-level wireless door bell unit, and befitting its higher price tag, it comes with a range of high tech features and outstanding performance. Perhaps the most notable feature of the DoorBot is its ability to sync up with smartphones and tablets, allowing you to see and talk to people who are at your door, no matter where in the world you are.

This is thanks to the DoorBot’s built-in camera, which allows images from your doorstep to be wirelessly transmitted to your phone or tablet worldwide. This camera also features night vision for low light conditions, as well as an adjustable lens, so you can see exactly who it is that you are talking to.

The DoorBot can be powered through existing wiring, or through its built in rechargeable battery. Despite its high tech approach, the DoorBot is very easy to install and use- you’ll have it connected to your wireless network within minutes. A more expensive proposition, but still a very tempting one.

If you’re looking for an entry level wireless door chime, then this Honeywell is for you. But don’t get fooled as its low cost is in contrast to its strong performance and sleek design. Powered by three AA batteries, this door bell boasts an impressive range of up to 250 feet, meaning that you can place the chime unit pretty much wherever you wish in your home and it will still be able to communicate with the push button component via radio signals.

The Honeywell features three different chimes to choose from, as well as volume control, and visual icons on the chime device to show exactly what is being signalled. Additionally, the Honeywell has the potential to have extra sensors and buzzers operating off of its chimer, so if you wish, you can have another push button fitted to your rear entrance, or motion sensors equipped on the windows. An attractive piece of technology also, it is very easy to install and operate, comes packed with all the hardware you need to mount it in whatever location you wish. An inexpensive option for those who are curious about wireless door bells. 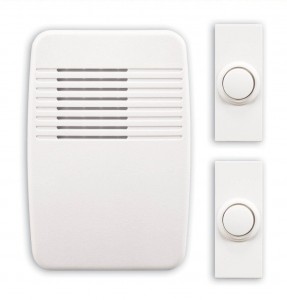 Another entry level door chime, the Heath Zenith is a sturdy, workmanlike package available for a very reasonable price. It may not be the most aesthetic of devices available on the market, but it features all the standard elements that you would expect of a wireless door bell, including a 100 foot range, a selection of two chimes, adjustable volume settings and a simple, one button operating system.

One interesting feature about the Heath Zenith is that it can be plugged directly into any conventional power outlet straight out of the box, giving you a good deal of flexibility regarding the chiming unit’s location, plus making for an ultra-simple installation. Overall, the Heath Zenith is an effective entry level item, and well suited for those who are seeking a quality bargain or those who are unfamiliar with wireless door bells. 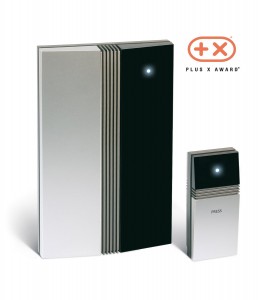 This model comes in at the mid range price-wise, meaning that there is a noticeable increase in quality and features over more economy-style  doorbells. The first thing that strikes you about the Jacob Jensen is it’s sleek and appealing design, courtesy of an award-winning design team.

But beneath its beautiful appearance, it boasts some top notch specifications and performance capabilities. The device is battery powered, and can run for up to two years on one set of batteries, and the device comes with five polyphonic chimes to choose from, the volume of which can easily be adjusted.

Additional chimes and sensors can be added to the main unit, allowing you to control multiple sensors and door bells through the one unit. Installation is very straightforward as well, and the unit can be free-standing or wall-mounted, whichever you prefer. To top it off, the Jacob Jensen also comes with a two year manufacturer’s warranty. If you are looking for something a little more advanced and eye-catching, then the Jacob Jensen may be the best wireless doorbell for you.

Wireless doorbells have existed for quite some time, but wifi-enabled doorbells have only just come to the scene. Two of our biggest contenders, the SkyBell and DoorBot both came life via crowdfunding.

The advantage of Wifi doorbells over wireless ones is that it’s connected to your home’s WLAN (for those who aren’t techy, it simply means your home’s wireless internet network). By doing so, you can be at work or anywhere in the world with an internet connection, and still see (and answer) whoever’s at the door.

If you’re waiting for a package to arrive, you don’t have to be at home (unless it’s a signed delivery). One important application is in your house’s security. If you’re away for an extended period of time, you’ll be at peace knowing that you can keep an eye at your house. Some thieves modus is to ring the doorbell and if nobody answers, they’ll break in. With these smart doorbells, you can make it seem as if you’re at home, by answering and talking to the person who’s at your door. They’ll never really know whether your home or not.

The only downside is that you have to have a smartphone or a tablet. But who doesn’t these days?

SkyBell vs DoorBot: Which is better for the smartphone generation?

Although both were crowdfunded, SkyBell (formerly known as iDoorCam) was brought to life using IndieGogo’s crowdfunding platform, whereas DoorBot was birthed through Christie Street.

Before we get into their differences, let’s first sum up their similar innovative features. Both the Skybell and Doorbot have the following features:

Both are awesome piece of innovation, but they have a quite a few differences. So which is better?

The Skybell connects to your existing doorbell wires, whereas the DoorBot is battery-powered. Each has its own drawbacks and merits. If you have an existing electrical wiring that powers up your current door bell, then the SkyBell is a good option, otherwise you’ll have to set up wiring to where you want to set it up. The Doorbot can be attached anywhere, as it runs on batteries. You just simply screw it to the surface. You also have the option to connect the Doorbot to an existing doorbell wiring, so it’s flexible in terms of set-up.

While they both have a brushed aluminium finish, the Skybell is round whereas the Doorbot is rectangular in shape.

This is where the two differs. With an exclusive motion sensor function, the Skybell alerts you when someone is at your door even if that person doesn’t ring the bell. The Doorbot, on the other hand, requires someone to push the button first before the video camera is activated and a live feed is sent to your device.

With the ability to function as a door security camera, the Skybell is clearly a winner in this case.

However, if you live in an apartment or anywhere where you have neighbors passing by every now and then, the motion detection feature can become a pain, especially if you have dogs in the neighborhood.

So which is better? It’s all up to you, really. It depends on your needs and your circumstance.

If you’re still undecided, then watch these videos.

Skybell Wi-fi doorbell – Answer the bell from any mobile device

3 Responses to “Best wireless doorbell reviews for your home”